Get in Tune with Each Character Class – Tank, Dealer, Supporter, and Healer

• One of the more enjoyable aspects of Epic Seven is getting to experiment with the composition of your team. Enemies will usually attack the Hero at the front of your team at a higher frequency than the rest, so it’s best to make sure that Hero is a tank (Knight/Warrior). Dealers (Mage/Thief) capable of quick and powerful attacks, plus healers and supporters will be much safer in this case. • However, this isn’t the only possible party composition. Often you can place Soul Weavers at the front who are capable of playing roles as both tank and healer, while powerful dealers behind them end the battle in a quicker fashion. If you prefer a much slower but safer method, you can also combine two tanks and two healers. Consider your play style as you create your own team! 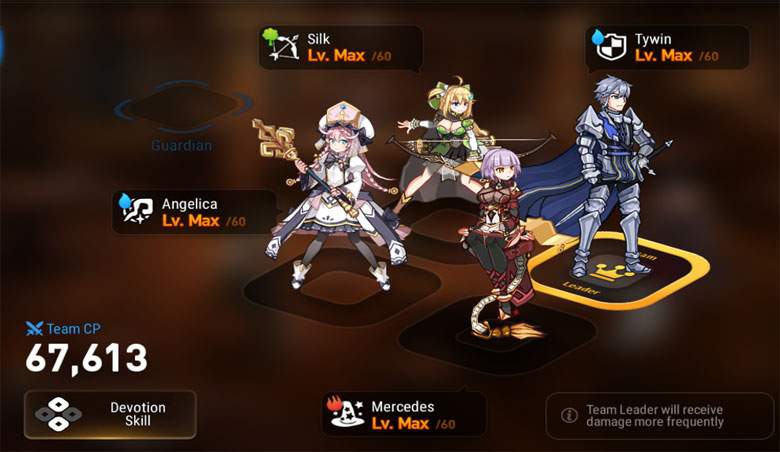 Equip Each Warrior Class with the Right Equipment

• Epic Seven offers six different kinds of equipment: Weapons, Helmets, Armor, Boots, Necklaces, and Rings. You can equip these in sets of two or four to provide additional boosts to character stats, which ends up making your play experience a lot easier to handle. • Different combinations are recommended for different Heroes – For Knights and Warriors, you can equip Health Set and Defense Set to provide greater HP. For Thieves and Mages, you can equip Attack Set and Critical Set to increase damage. For Rangers and Soul Weavers, you can equip Speed Set to boost healing and support abilities. 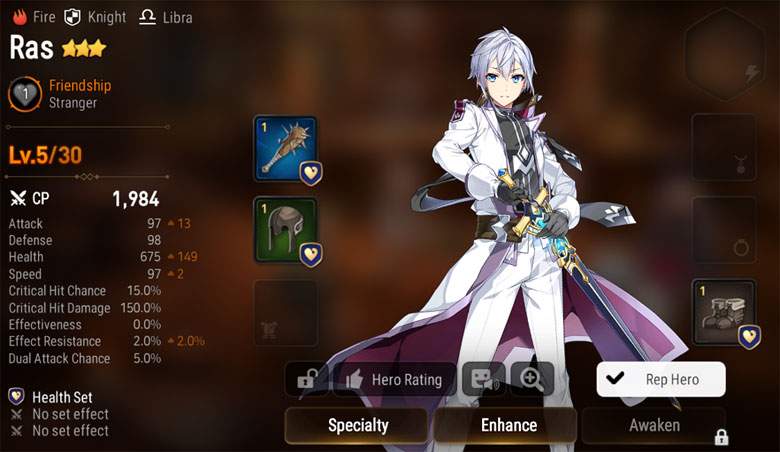 • It’s very important to understand how the various buffs and debuffs used by monsters and Heroes work. All buffs and debuffs last for a limited amount of turns, as indicated by the number on their icon. Buffs include barriers that can protect allies or increases to stats such as Attack or Defense. • Debuffs on the other hand can decrease these stats or even paralyze enemies completely. Being able to time buffs and debuffs correctly and quickly dispelling debuffs on yourself and buffs on your enemies, will be of a great advantage to you in battle. 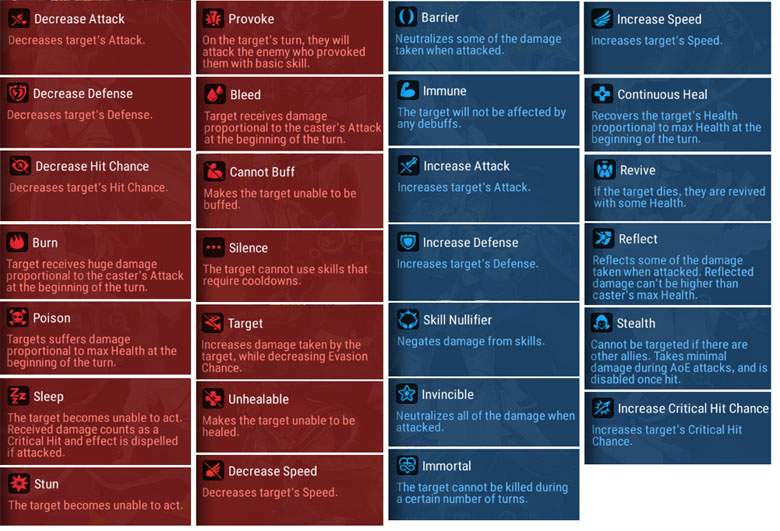 Know Your Elemental Strengths and Weaknesses!

Fight Alongside Supporters and Join a Guild

• During Adventure or Side Stories, there can often be times where you get stuck on powerful enemies. This difficulty can be overcome by trying again with a different combination team, grinding earlier stages to level up your Heroes, or improving their equipment. Unfortunately, sometimes not even this is enough. Rather than giving up, you can enlist the help of a Supporter to fight by your side. You can tag them in at any point or have them automatically replace the first of your Heroes to die. These Supporters can be chosen from a list that appears when you first enter a stage. • Joining a Guild can improve your life in Epic Seven significantly. You can communicate with other Guild members via chat to learn how to improve your Heroes and request various items you need. You will also gain access to a Guild “Member Shop” where you can purchase MolaGora Seeds, Catalysts, and other materials necessary for your Heroes’ growth. To purchase items in the Member Shop you need Brave Crests, a currency that can be earned by donating gold to the Guild and or sending Aid to Guild members. See Also 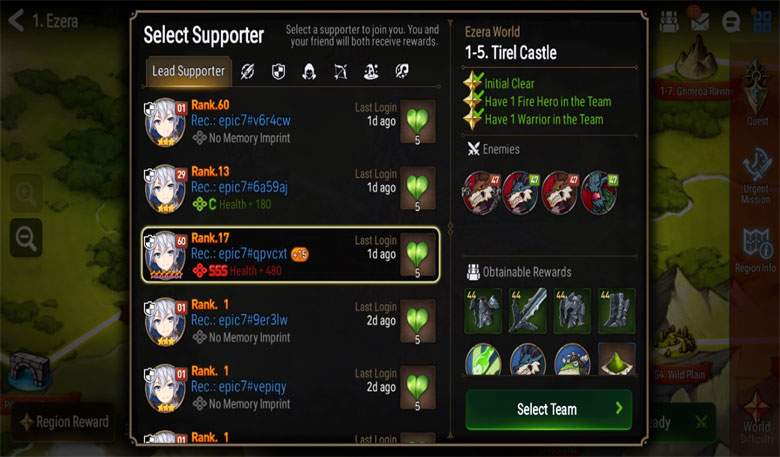 Your first major milestone as an Epic Seven player takes place at the end of chapter 1, when you unlock the selective summon. You get 30 attempts to get a hold of a great hero. When you hit gold, it’s time to stop, because you won’t get another 5-star character. The drop rates here are slightly higher than the other summons, just to make it more fun. The developers at Smilegate Megaport seem to know the gacha genre all-too-well. As a rule, you won’t want to pass up on Angelica. The only situation where you want to do this is if you get a strong 5-star unit, like Ravi, Vildred, or Tamarinne. To find out which of them are worth it, you can check out our guide to the best Epic Seven PvE heroes. Don’t be fooled by shiny artefacts. You need good heroes right now. We were fortunate enough to land on Angelica, so we’ll go with her. Even if the other heroes are trash, she can carry us easily until the endgame. 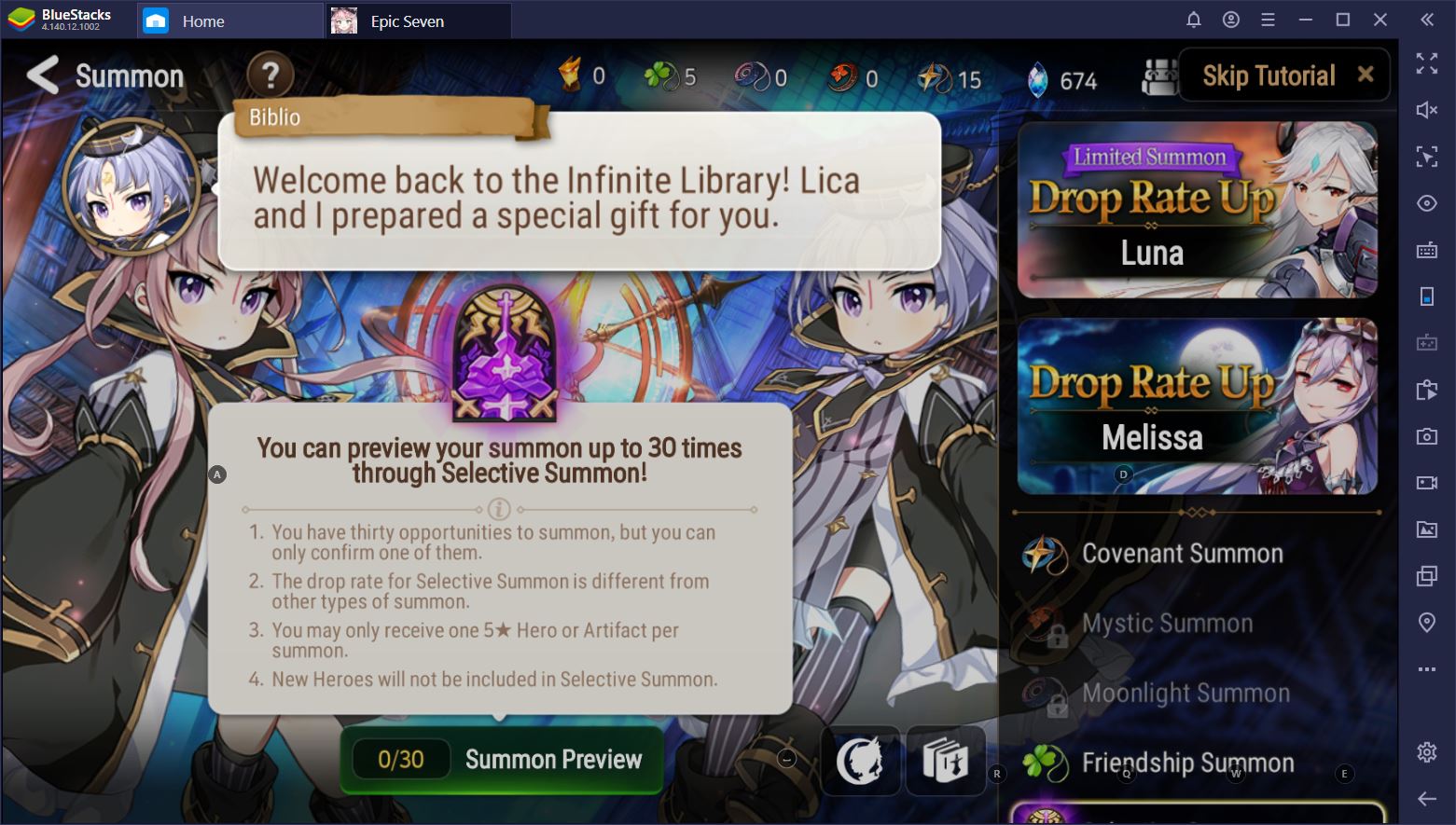 The Labyrinth and the Abyss Tower

The more you progress through the labyrinth, the higher your odds of getting T4 equipment. These sets are incredibly strong (Unity, Immunity, and Rage, among the best), so you’d best take advantage of them to get your main DPS in the 50k CP threshold. In addition, the Abyss tower has no less than 3 Lifesteal sets that also come with strong attack stats.

When the secret shop is selling any jewelry or boot items that have over 50% attack or health, you should absolutely get them. They’ll be a handsome boost for your tank or main damage dealer. If you do get a hold of some neat, right-side pieces, don’t be afraid to really push them in terms of enhancement. //Image 5 To give you some perspective on how much enhancement can change the impact of a single piece of armor, an item with +15 is 5 times stronger than the same item with +0. It is of utmost importance for your success in the mid game to get the perfect right-side armor up to +12 or, ideally, +15.

Do the (Side) Story

Clearing the main chapters should be your first concern… after you clear the Side Story event. Whenever one of these is taking place, do your best to farm them as religiously as possible. You will need your account to be Rank 9 in order to access them, but this shouldn’t be a problem if you’ve spent more than a couple of hours in-game. 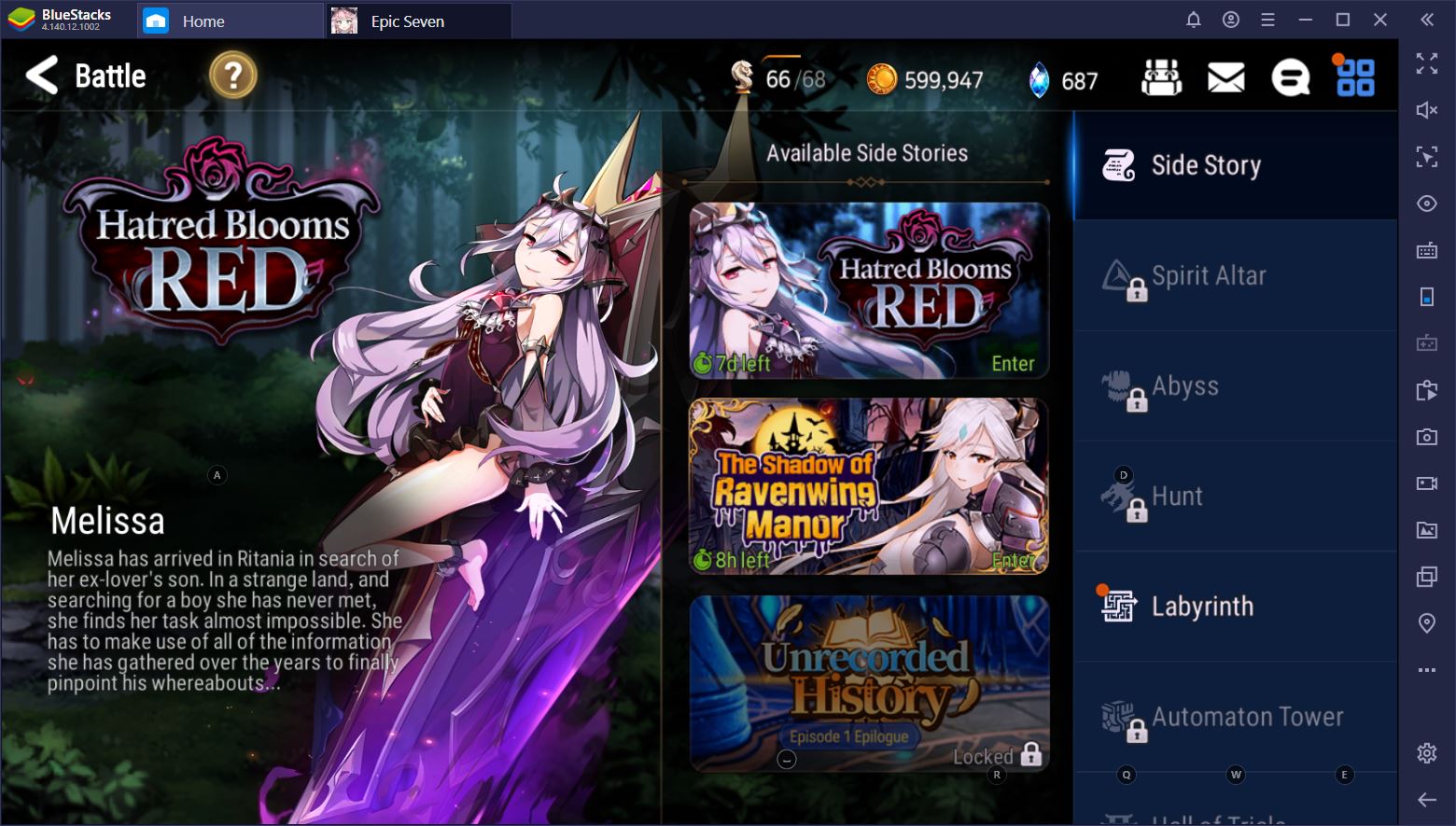 Never feed away your fodder units before you fully max them out. From a strategic standpoint, this is a kernel aspect of Epic Seven and, if you know what you’re doing, your best heroes will always have fodder to feed on. This means they’ll keep growing at a steady pace and you’ll be able to progress through the game nicely. You want to feed random 2-stars to white doggies (Angara), as well as to a select one or two other fodders. 3-star yellow dogs and 3-star white dogs eat the lower ranks, along with any other 3-stars you might have lying around. On the 4-star step, black dogs and yellow dogs eat everything on their level and underneath. Since yellow puppies level up the fastest, you’ll want to keep some of these around. 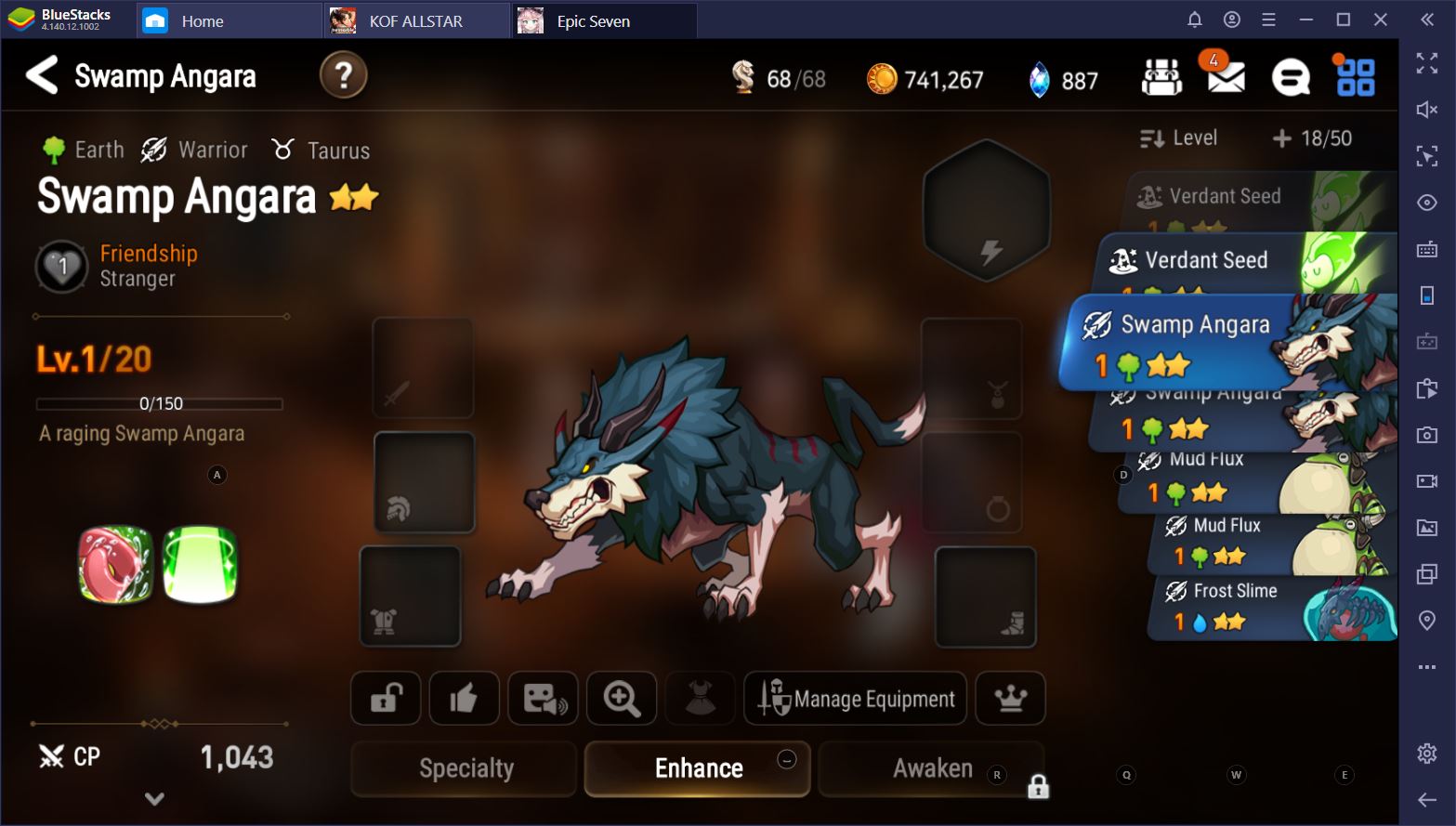