Participate in on-board game shows to get free stuff

Your best way to get some free stuff on the cruise also involves a lot of fun. In the game shows (including the “newlywed” game), they require some audience participation. Not everyone can join in, but if you get selected then you almost always get some sort of prize at the end. It’s nothing big — maybe a t-shirt and a gift certificate to the gift shop — but it’s the best way to get something for free while on your cruise.

You haven’t laughed until you’ve stood on the port side of the ship close to departure time in a port of call. Keep a close eye and you’ll almost always see a few people making a mad dash back to the ship. You’ve never seen people run as fast as when they think the ship is about to leave them. On a side note, always return to the ship well before the “all aboard” time.

If flying, always depart for your port city the day before

With more ports than ever operating around the United States, many people are able to drive to their cruise. Still, there are tons of folks who fly in to take their trip. If you are taking a flight, always aim to get there the day before. It seems like every day there are horror stories of delayed flights. Weather can delay or ground a flight. Security lines can sometimes take hours and cause people to miss their planes. Mechanical breakdown is always a possibility. And now you never know when a computer malfunction is going to ground an entire fleet. Flying in the day before allows you a little more of a cushion to get to your port city without having to stress that you might miss your flight… or even worse, your cruise.

Don’t expect much on TV (Netflix is great)

We love nothing more than relaxing and watching some TV after a long day in port. Unfortunately, cruise lines don’t offer much in the way of television stations. You won’t get the basic channels you’d expect. Instead, it’s a few news stations and maybe a couple of channels for movies and a couple for cartoons. Favorites like ESPN and other cable stations usually aren’t available. Netflix and other services are lifesavers. Download your favorite shows ahead of time (so that you can watch without Internet access) and catch up on your programs.

What’s that huge line you see in the middle of the ship at the beginning and end of the cruise? It’s the line to talk to Guest Services. It’s always a hassle to have to deal with getting things straightened out with your onboard account, but it’s something you occasionally have to do. Here’s a big timesaver. If you do have to talk to Guest Services, plan your visit either later in the evening or early in the morning. At these times the line is almost non-existent so you can talk to a rep immediately. (Guest Services are open 24 hours a day during the cruise.) You can also purchase perks like Carnival’s Faster to the Fun to save time if you don’t want to be bothered to go at off hours.

Be sure your clock is set with the ship’s time

Depending on where you sail, there will be a difference between the ship’s time and the actual time on shore. Why does this matter? If you don’t return to the ship by the right time, you could get left in port. To make things easy, just make sure your watch is set with the ship’s time as you get off in port. That way you are matched up with the ship’s schedule and don’t risk missing the return time.

Always wait for people to exit the elevator

A quick way to be identified as a rookie cruiser is to stand right in the doorway of the elevator when it opens. Elevators are the main way of getting around the ship — they are always crowded. It’s polite to let the people on the elevator get off before before trying to enter. Just stand to the side as the doors open. It will make thing go much smoother and other passengers will be grateful.

Your ship cabin may come with a full-stocked mini-fridge. The items inside are counted after you leave, so if you want to use the fridge, you can just set everything out (or ask your room steward to empty it) and use it to keep your own drinks/food cool. Just be sure to put everything back or you’ll get charged for whatever is missing. 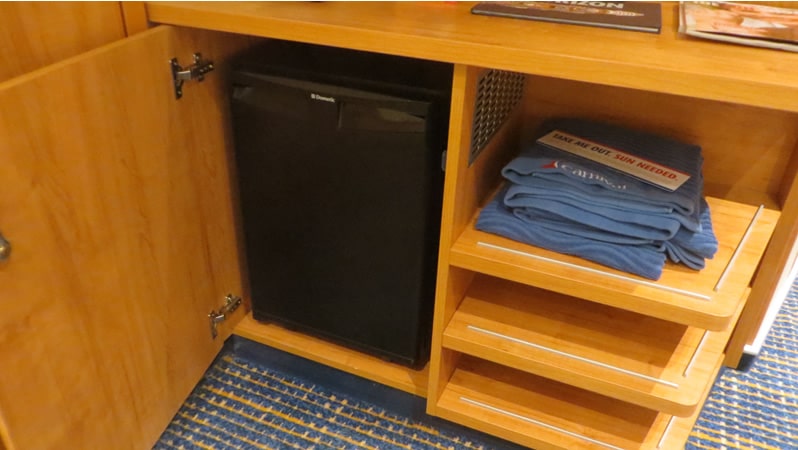 Ok, no one would confuse travel by cruise ship with the speed of traveling by plane or jet. But considering that a ship is roughly as long as the Empire State Building is tall and has about as many rooms as The Mirage in Las Vegas, the fact they can move at all is impressive. Truth is, the cruising speed of many ships is around 25 miles per hour. That may not seem like much, but many neighborhoods have speed limits of 25 mph. Next time you see a car drive by, imagine that a cruise ship was gliding by instead.

It’s hot in the Caribbean, so who wants to wear shoes? Well, you’d be surprised at how tired your feet will get if you’re touring around in just a pair of flip-flops. Instead, bring a pair of your most comfy walking shoes, or a pair of water shoes that offer more support. Your feet will thank you for it at the end of the day.