Create a Storyboard and/or Shooting Script

The best marketing videos don’t just happen – they’re a result of meticulous planning and preparation. Before you even think about getting your camera equipment ready, consider putting a storyboard and shooting script together. Storyboarding helps you figure out exactly what shots you need before you start filming, and a shooting script is like a screenplay for your video. Storyboard panels for ‘Harry Potter and the Deathly Hallows, Part 2’ You don’t have to draw a stunning masterpiece for your storyboard. In fact, you don’t need to draw it at all. You can use a series of still photographs as a storyboard, or even rough sketches or stick figures – whatever is easiest. Just make sure you know what shots you need before you start filming. Remember – the more time you spend planning your marketing video, the less likely you are to find yourself missing footage later on. 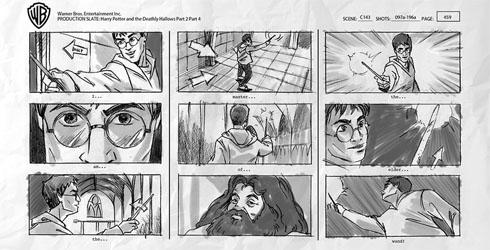 Prep Your Presenters or Interview Subjects

Make sure all your presenters or subjects know what’s expected of them beforehand to minimize mistakes or wasted time on the day of the shoot. You should have a good idea of what the finished product is going to look like long before you arrive at your location, and your presenters should know exactly what they’re doing. Also, try to avoid having your presenters memorize pages upon pages of script – they’re probably not actors, and asking this of them is likely to cause more anxiety (and mistakes) than allowing them a little freedom.

Know What B-Roll Footage You Need

Planning to intersperse shots of your team hard at work into your video, or cut away from your presenter to other footage? Then you need what videography professionals call B-roll footage. B-roll is essentially any footage that isn’t of your primary subject. If you’re filming an explainer video showcasing your software product, B-roll footage might include shots of satisfied customers using your product, or an external shot of your offices, for example. Whatever footage you need, figure it out during the pre-production phase to avoid situations in which you need footage you don’t have. Remember – there’s no such thing as too much B-roll. TIP: If you need a shot of something that would be difficult or impossible to film yourself, such as aerial shots or footage from exotic locales, you can always use stock B-roll footage. I’ve used footage from Beachfront B-Roll several times in the past, and the quality and diversity of the footage is excellent.

Use the Rule of Thirds

Whenever you’re filming anything (or taking photos), remember the “Rule of Thirds.” Imagine your shot is divided into nine equal sectors by two horizontal lines and two vertical lines, like so: Notice how the primary subject in the image is positioned where two of the four points (which are known as the “anchor points”) intersect? This technique is used to draw the eye toward the main points of interest in the shot. The viewer’s eye will naturally gravitate towards the top-left anchor point, and many people will spend longer dwelling on this area than other parts of the shot, making it a logical point at which to position the main area of interest in your shot – in this example, the face of the subject. This is a pretty standard composition using the Rule of Thirds, and although it might not seem that remarkable, composing your shot in this way makes it easier for the eye to “read” and results in a much more aesthetically pleasing shot overall. Your audience probably won’t even notice the composition of the shot, because it just “works.” The Rule of Thirds can be applied to just about any type of shot, including landscapes. Using the horizontal lines is a great guide for where the horizon line of your exterior shots should be, and where your subject should be positioned: In the example above, the upper of the two horizontal lines is the logical horizon point for this shot, as using the lower of the two would result in the shot containing way too much empty sky. Of course, this might be precisely the effect you’re trying to achieve, so think of this as a guideline rather than a hard-and-fast “rule.” Many cameras enable you to overlay this grid onto your viewfinder, making it easy to compose your shot before and during filming. However you choose to frame your shot, make sure that you keep composition in mind, especially when setting up your camera. To read more about shot composition, check out this great guide to line, shape, negative space, and other composition techniques. 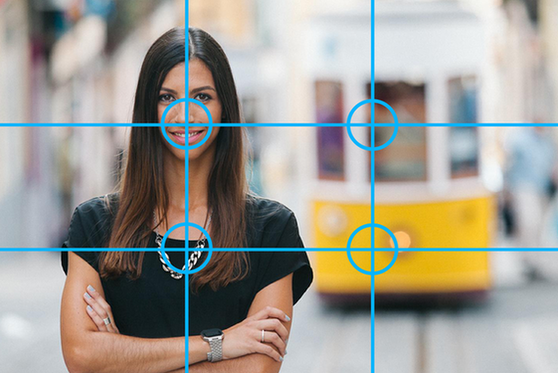 When it comes to lighting in video, different kinds of light have different temperatures. These color temperatures are measured in degrees Kelvin (°K): Again, this is a complex topic and could easily warrant its own post, but for our purposes, all you need to know is that mixing two light sources with different color temperatures will make for an unevenly lit shot. Let’s say you’re shooting an explainer video featuring a member of your team. You’ve chosen an indoor room with good acoustics (more on this later), and you’re ready to start filming. The room is lit primarily by fluorescent lights, but there’s a problem – a large window that lets in plenty of natural daylight. If you position your subject too close to the window, you could run into a potential contrast in light sources – the fluorescent overhead light with a temperature of around 4500° K, and the daylight, which has a temperature of around 5600° K. This kind of conflict can be difficult to compensate for, and it’s a headache you really don’t need. Wherever you’re shooting, ensure that your primary light source is even and consistent. If you shoot indoors, avoid rooms with windows. If this isn’t possible, position your subject sufficiently far from the windows to avoid the daylight interfering with your shot.

Now we know that different light sources have different temperatures, we need to account for these temperature ranges by manually setting the camera’s white balance – a process that basically tells the camera what “true white” looks like in an environment to avoid color casting. In the image above, the shot on the left has a blue color cast caused by the natural temperature of the daylight in the shot. The white balance of the shot on the right has been set correctly, capturing the true colors of the image. Many cameras have an auto-white balance feature, but I strongly recommend learning how to set it manually. This avoids relying on your camera to achieve a correctly color balanced shot. You can learn how to do this by referring to the instruction manual of your camera. Even if the color casting in the example above is the effect you’re trying to achieve, film the shot using the correct white balance and adjust the color in post-production – don’t rely on lazy camerawork to achieve a particular effect. 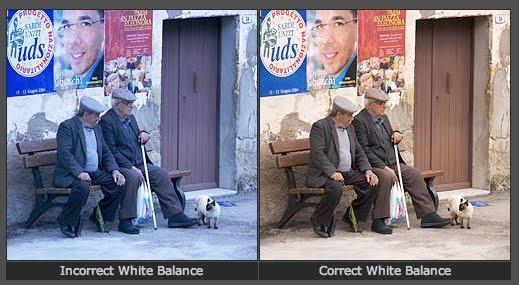 Unless you’re filming a Broadway musical, you should probably avoid placing your subject in bright pools of direct light. Intense primary light sources can blow out the brightness and contrast of your shot and cause unflattering reflections on your subject. There are many different lighting techniques, each of which can be used to achieve a certain effect. If you’re lucky enough to have a professional light rig, don’t just point it at your subject – make sure your shot is lit evenly, and use a reflector and/or a diffuser to minimize harsh spotlighting or shadows (such as the “mustache” in the far-left example above). To learn more about lighting for video, check out the awesome videos at the Vimeo Video School. 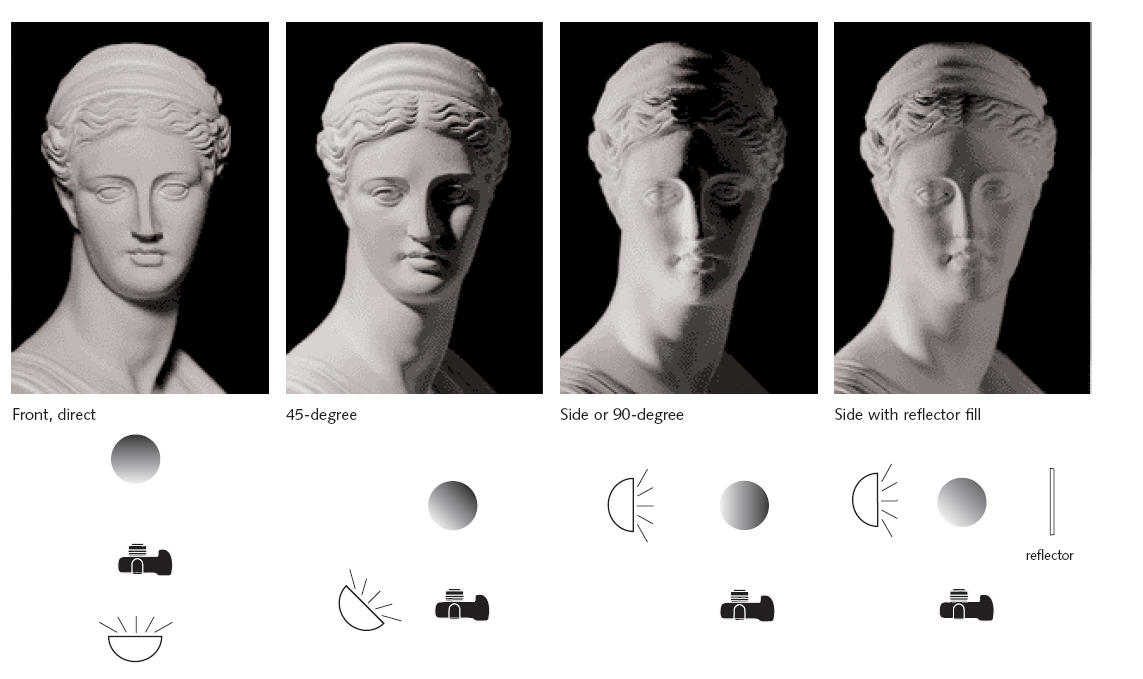 Check the Acoustics of Your Filming Location

Before you start filming, check the acoustics of the location in which you’re shooting. Is there an echo? If so, try and find somewhere else to shoot. You can fix a lot of audio problems in post-production, but even a faint echo can be a nightmare to get rid of completely. You don’t need to soundproof a conference room in your office (but hey, if you can, go for it), but be sure to bear the acoustics of your location in mind when you’re scouting for possible places to film. It could save you a lot of headaches later.

Even experienced presenters make mistakes, and the last thing you want is a situation in which you only have a single take of a crucial part of your marketing video. Even Norse gods mess up sometimes. On the day of the shoot, make sure to run through multiple takes. This provides you with a safety net in case you notice something wrong with one of the takes, and allows you to edit together your final sequence from several clips of the same sequence rather than relying on just one. Even if the first take goes flawlessly, shoot another – just in case.

Tidy Up Your Clips Before You Start Assembling the Rough Cut

When importing your footage into your editing program, clean up your clips as you import them. Most editing packages allow you to set “in” and “out” points for each clip, reducing their length by trimming out pauses, giggles, and false starts. Editing the final sequence together using trimmed clips is a lot easier than adjusting each individual clip on the fly.